If you had to choose seven Irish wonders, what would they be?

We’ve selected seven world-class wonders around Ireland, for the launch of our geeky new online Atlas of ingenious places.  You can see our seven wonders on the Atlas (and there is a full list below).  They are all national treasures that we hope more people will visit.  But, if you were choosing, which wonders would you choose?  Click over to our Facebook page, and tell us about your wonders of Ireland.

The great telescope at Birr, the world's biggest for 70 years

Our chosen wonders include a great scientific discovery, several feats of engineering, and some amazing fossils and rock formations. They all feature on the new Atlas, which showcases the ‘Top 10’ places to see around Ireland for science, astronomy, engineering, geology, wildlife and botany — that’s 60 great locations in total!

The Seven Wonders of Ireland

In what you could say is ‘order of appearance’…

Among the oldest fossil trackways in the world, and it’s in Valentia Island, Co Kerry.

Amazing fossil footprints, among the oldest in the world, at Valentia Island, Co Kerry. These were made 385 million years by a creature resembling a salamander as it walked across some mud, and they have been preserved in the rock ever since.  Absolutely wonderful!

The Giant’s Causeway, Co Antrim: the polygons of rock are so perfect, people once thought they were artificial.  Actually, they formed when a vast lake of molten lava cooled slowly, 60 million years ago. The region also has ancient volcanoes, caves, fossils and rare minerals. Lots to see in this UNESCO world heritage site!

The Burren, Co Clare:  blessed with riches, this is a strange, rocky limestone landscape, with tremendous ecological diversity; amazing caves; and the flowers are justly world-famous, including 23 species of orchid. Best time to visit is May. 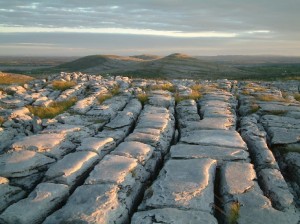 The world’s oldest astronomical observatory — Newgrange, Co Meath: this feat of precision engineering pinpoints the Winter Solstice, the turning point of the solar year, and it was built 1,000 years before Stonehenge,  by Neolithic people who had neither metal tools nor the wheel.

Eureka! A great scientific discovery, at Broome Bridge, Dublin:  On 16th October 1843, a revolutionary new type of algebra was invented here by Ireland’s greatest scientist, Sir William Rowan Hamilton, as he walked by the Royal Canal.  You could say that his algebra helped to land a man on the Moon, because it is used to control spacecraft and in 3D games.   A plaque marks the spot, and for scientists this is a place of pilgrimage!

The Hubble telescope of the Victorian Age, Birr Castle, Co Offaly.  The world’s biggest telescope was built in 1845, by William Parsons, third Earl of Rosse, and it could see further into space than ever before. With it,  Parsons discovered the Whirlpool Nebula, and other nebulae.   All built with local labour,  it was the world’s largest telescope until 1917.  Now restored to working order – visit, and see what you can see!

A wondering of the engineering world: the elegant Boyne Viaduct, still in use.

Have you visited any of these wonderful places?

Do post a photo when you’re on our FB page,  especially if you’ve visited all seven of our chosen wonders!

We hope you enjoy exploring the new Atlas.

The 7 Wonders of Ireland — press release
What are Ireland’s ‘Top 10’ science places?

2 Responses to The Seven Wonders of Ireland — have you seen them all?