Did you know . . . Ireland has some of the world’s oldest fossil ‘footprints’?  Irish algebra helped to land a man on the Moon?  The great telescope at Birr was the biggest in the world for over 70 years?  And we have an astronomical observatory that is 1,000 years older than Stonehenge? 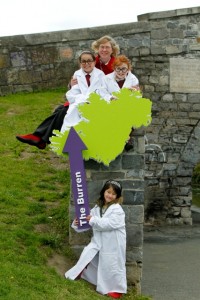 At Broome Bridge, a place of scientific wonder, for the launch of the new atlas. The commemmorative plaque (top right) marks the spot where quaternions were invented.

These national treasures are among the seven wonders of Ireland featured on a new Irish Atlas launching today.  The ‘Atlas of Ingenious Ireland’ is an interactive online map, designed to highlight local and national sites of scientific interest around the country for people to discover, and part of the Dublin City of Science 2012 programme.

The chosen wonders include natural and man-made wonders, and a Eureka! moment of discovery. The atlas also features 60 top places of scientific interest around the country. From museums to commemorative plaques, to wildlife watching, the website has it all, including some of Ireland’s best gardens, and the top 10 astronomy and science sites.

Mary Mulvihill, journalist and author of the book ‘Ingenious Ireland’, who created the website said: “The Atlas is packed with wonderful scientific gems, from the Giant’s Causeway in the north to the world’ soldest working lighthouse at Hook Head. It was hard choosing just seven wonders, but we think these are special.

“We hope the Atlas encourages people to get out and about and explore some of the many fascinating places around, and to discover that Ireland has this rich scientific heritage. With the new website, they can see at a glance what’s around them.  We also hope that people will share their knowledge by ‘adding their favourite place’ on the site, so that the Atlas can become a comprehensive resource for everyone.

“There are so many great places to discover!” Mulvihill said, adding that she would love if people who have visited all the seven wonders would drop by their Facebook page to say hello.

Commenting on the site, Professor Patrick Cunningham, Chief Scientific Adviser to the Irish Government, said: “The Atlas of Ingenious Ireland is in itself an ingenious tool to highlight the depth and breadth of Ireland’s scientific heritage. It builds a clear picture of the nation’s record of innovative discoveries, most of which are easily accessible to the public and just on our doorstep.  In addition to the online atlas, people can also take part in over 160 events running during the course of the year as part of the Dublin City of Science 2012 programme. ”

The new atlas is supported by Dublin City of Science 2012 and is part of the year-long celebration of science with a programme of events that cross the worlds of art and culture to entertain the general public and visitors to Ireland’s capital.

The atlas was developed by Cookie Web of Mullingar.
Ends

View all posts by mary →
Mixing humours: Ireland’s first blood transfusion
The Seven Wonders of Ireland — have you seen them all?