You are here: Home › About Mary Mulvihill 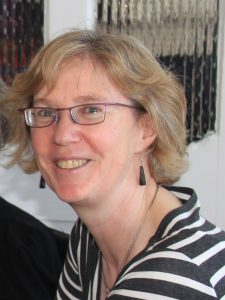 Mary Mulvihill was an award-winning science writer, and a broadcaster and media consultant with over 25 years experience in print and radio.

Ingenious Ireland was founded by Mary, who was passionate about Ireland’s science heritage. From great inventions and discoveries, to fascinating fossils and old mines – Mary loved it all! 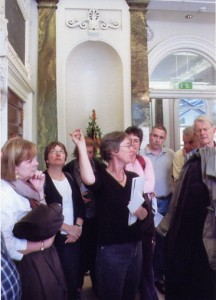 She loved telling her ‘ingenious’ stories in books, talks, and walking tours around her native Dublin.  As The Irish Times says, she has “a way of making her subject instantly accessible”.

A group of friends and family have set up a Mary Mulvihill Memorial Award open to undergraduate and postgraduate students enrolled in an Irish higher education institution. Click for details of how to apply for the Mary Mulvihill Award.

Mary was passionate about women in science, and about science in Ireland, and was instrumental in setting up the Women in Technology and Science WITS network in 1990. In 2010 she started the science media company, Ingenious Ireland, to make more people aware of the country’s scientific heritage.

Mary produced and edited two books about historic Irish women scientists:  Lab Coats and Lace  (2009), and Stars, Shells and Bluebells (1997, currently out of print). Her other books include the award-winning ‘Ingenious Ireland‘, ‘Drive like a Woman, Shop like a Man‘,  and ‘Ingenious Dublin’.  She was a columnist with The Irish Times, and has written for numerous publications down the years, including a decade as editor of Technology Ireland magazine.  Her many science series for RTE radio and Lyric FM include: Right Brain/Left Brain, The Quantum Leap, 2020 Vision, and The Perfect Pint. 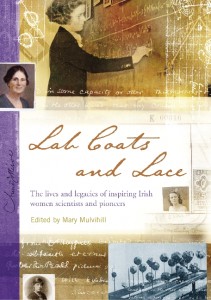 Ingenious Ireland provided media training, especially for women in STEM, as well as running geeky walking tours, and making app and audio tours.  In a previous existence, Mary worked as a geneticist and statistician in agricultural research where, among other things, she judged pedigree cattle and developed a computer dating service for the country’s cows. But that’s another story!

She was a member of the Irish Council for Bioethics, the founding chairperson of Women in Technology & Science network (WITS), and a council member of the Industrial Heritage Association of Ireland.  In 2014, Mary Mulvihill was named as one of Silicon Republic’s 100 Top Women in STEM.

In 2020 Dublin City university gave Mary a  posthumous alumni award; in 2021 a plaque in her memory was erected at her former home in Dublin and in 2022 she was one of 80 influential women included in the book ‘Her Keys to the City‘.