You are here: Home › Buzz › Launch of new maths trails — Dublin by Numbers
By mary on October 17, 2011 in Latest News, Press Release 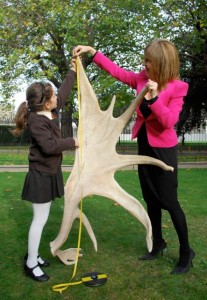 Meteorologist Evelyn Cusack, who launched the trails, and Christina Hickey (7), from Scoil San Carlo Junior in Leixlip, measure the antlers of an ancient giant deer, at the Natural History Museum in Dublin.

An Irish system of algebra that helped to land a man on the moon, and the geometry of a Dublin sculpture are just some of the stories featured in three new city tours, that also get people to spot symmetry in Georgian buildings, measure extinct Irish fossils, and see if Wolfe Tone’s statue is out of proportion!

The new ‘Dublin by Numbers’ trails are packed with puzzles and things to do at each stop, all celebrating the mathematics around us every day.  Designed for families and schools (ages 6-plus) the trails were launched today [October 17, 2011] by meteorologist Dr Evelyn Cusack, in the Natural History Museum, Dublin.

An enthusiastic Dr Cusack, deputy director of forecasting in Met Eireann, said that “maths teaches us priceless skills in problem-solving – if people are mathematically informed they will make better economic and political decisions. The rigours of maths would also help us not to be hoodwinked by pseudoscience and trickery  – such as seasonal long-range weather forecasts!”  She added that “Children love maths puzzles and challenges and will have genuine fun, as well as intellectual stimulation, on these trails.”

The trails were developed by science writer Mary Mulvihill, whose company Ingenious Ireland specialises in walking tours with a science twist.  “These trails make a great outing for families, school groups.  They take you to both familiar and less well-known places, and you’ll see them differently, with our mathematical lens.” Several Irish scientists are featured, including two women mathematicians with Irish connections.

The activity trails are free to download, thanks to support from key project partners: Discover Science and Engineering (DSE), Intel, and sponsors: the Centre for the Advancement of Science and Mathematics Teaching & Learning (CASTeL), and Engineers Irelands’ STEPS programme.

DSE Director, Peter Brabazon, said it “is a great way of learning maths by exploring it directly in the world around us”, adding that the project strongly supports the work of Discover Science and Engineering, which is about finding new ways to make the public aware of opportunities for learning and careers in science, maths and engineering.

Dr Pádraig Ó Murchú, manager of Education & Research at Intel Ireland, welcomed the trails as “a fun and interactive way to introduce young children to maths and numbers.    Numbers and maths are the building blocks for science and technology, and if we want to become a knowledge society we can only do that if we are scientifically literate and numerate.”

CASTel director, Dr Eilish McLoughlin of DCU, said that by using  Dublin by Numbers “teachers will readily get ideas on how they might prepare similar trails for their own locations, and in so doing inspire the mathematical imagination of the children they teach.”

Dublin by Numbers was launched as part of Maths Week and Innovation Dublin 2011.

More about the trails: The richly illustrated activity sheets are free to download, and packed with activities, riddles and puzzles, and make a perfect outing for a family or school group.

3 Responses to Launch of new maths trails — Dublin by Numbers