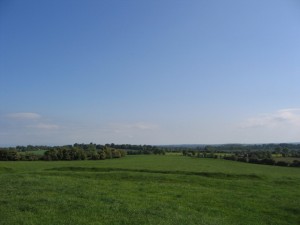 The Hill of Tara: 2,000 years ago horses were sacrificed and eaten here!

Forget burgers!  The recent controversy reminds us that, 2,000 years, we were eating horsemeat in Ireland . . . but not just any menu, we’re talking very special occasions: the inauguration feast for a High King at Tara.

And how do we know?  Because archaeologists have found the left overs!  Horse bones were discovered at Tara during excavations in the 1990s, and knife marks on the bones are a giveaway, revealing that the meat was butchered and eaten.  So, archaeologists believe that these are the remains of ancient sacrifices and rituals.

The bones were found buried in a ditch on top of the Hill of Tara, near the great burial mound known as the Mound of the Hostages.

It was a fascinating find, but not surprising, because horse sacrifice was common in inauguration ceremonies around the world, and even up until a few centuries ago in Ireland.

There’s a word for this

The horse — sometimes it’s specifically a white mare – was killed, and the meat was cooked and eaten.   There’s even a word for that: hippophagy.

In one infamous account of a ceremony in County Donegal in the 12th century, the king supposedly mated with a white mare, before the animal was slaughtered.  But that account was by the notorious Giraldus Cambrensis, a Welsh-Norman chronicler who liked to paint the Irish as heathens.  Then again, some of what Giraldus wrote was true so, maybe this was an accurate account? Inaugurations were often seen as a marriage, between the king or chieftain and the land, and horses were usually involved.

As a result, Christianity considered horsemeat to be a pagan and a taboo food, and banned the eating of it, according to  Prof  Helena Hamerow, from Oxford University’s Institute of Archaeology, quoted in Medievalists.net.

My kingdom for a horse

Horses have been associated with gods and kings for thousands of years, and revered as mythical beasts.  Ancient kings are often depicted as half-man, half-horse, and some kings were buried with their horses and chariots.   White horses are especially potent: like the Bronze Age carving of a white horse into the chalk hill at Uffington in England; and the Roman historian Tacitus describes how wild white horses were kept in a sacred forest in Germany in the first century, and used by kings and Druids to tell the omens.

In Ireland, some of the surnames associated with kings come from old words for horses, such as the name Haughey, which comes from Eochaidh, meaning horse.  And not forgetting that horse racing is still called the sport of kings – and as it happens, there is a racecourse near Tara at Fairyhouse.

Finally, horses – and especially white mares – are intimately associated with the Tara landscape.  The river valley between there and Skryne is the Gabhra, which means White mare in Irish.  And the crannóg near Dunshaughlin, where the mediaeval kings of Tara stayed, is in Lagore, or Lough Dá Gabhra, the Lake of the White Mare.

For a comprehensive review of the history of horses in Ireland, see Dr Finbar McCormick’s 2007 review article. [Added 26.2.2013]

For more on Tara, check out the Ingenious Ireland audio guide to Tara, which includes this story of horses and high kings.

View all posts by mary →
A hidden treasure for Science Week!
Spoiler alert! The shamrock’s a sham