This is a fascinating bottle with a weird story.  We learned about it on a tour of historic Aungier St with Dublin City’s architects, archaeologists and conservation officers. 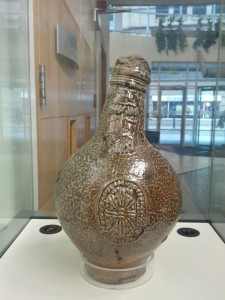 It’s a pottery bottle, from about 1600, intact and sealed.  But x-rays reveal that there is a lot of “stuff” in it, including old nails.  This leads the archaeologists to conclude that this is a “witch bottle” — a common folk magic that was used around Europe.

A bit like leaving rags at a holy tree or well, the idea was to put nails, urine, bones or other bits and pieces in a bottle, and then bury or burn the bottle.  As the contents rotted, or burned, your ailments and worries would disappear.   Significantly, it was also believed such a bottle could keep a curse at bay, or — better still — return a curse to the curser!  And a witch bottle might be buried under a hearth or threshold.

This example was found in excavations on the site of Beaux [Bow] Lane house,  a new office building on Mercer’s Street, and on what was part of an old monastic settlement that was also one of Dublin’s leper hospitals from about 1200-1500.

This kind of bottle, with the face of a man, is called a Bellarmine bottle after the fierce man of the Inquisition, the Italian Cardinal Bellarmine (1542-1621). 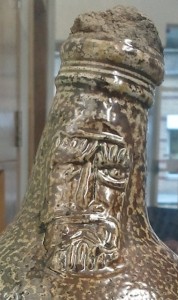 The 'Bellarmine' face on the Dublin 'witch bottle'.

The Dublin witch bottle is currently on display (loan from the National Museum) in the hall of Beaux Lane House, along with three information panels about the area and the excavation.  It is well worth a look!

Did you like this story? Then you’ll love our Blood and Guts medical tour of old Dublin, which includes the story of the leper hospital.  We’re launching the downloadable MP3 version of that tour next week for Science Week 2012 — watch this space!

The Aungier St tours continue on Wednesday and Friday of this week as part of Design Week 2012.

If you enjoy exploring hidden Dublin,  you’ll find lots of useful information in the Insider’s Guide to the Dublin, compiled by people who love the city.