Tuesday October 16th 2102: on Hamilton Day, the day quaternions were invented in Dublin in 1843

As hundreds of geeks gather in Dublin for the WebSummit… two new city walking tours are launched to celebrate Ireland’s many great inventions and scientific discoveries. 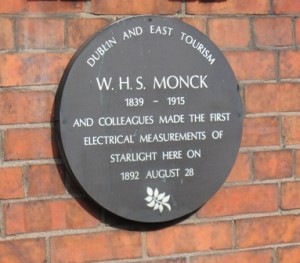 Plaque marking the Dublin house where starlight was measured for the very first time.

Did you know. . . that Dublin algebra helped to land a man on the Moon?! That an Irish physicist shared the Nobel Prize for splitting the atom? That perforated stamps were invented by a Dublin printer? And that he made a fortune just from punching holes in paper? Or that the first ever hypodermic injection was performed at the city’s Meath Hospital?

These are just some of the many Irish inventions and discoveries featured in two new Dublin walking tours that celebrate home grown ingenuity, and are launched today. The launch marks Hamilton Day, the anniversary of the day in 1843 when Ireland’s greatest scientist, Sir William Rowan Hamilton, invented a revolutionary new type of algebra, called quaternions, by the Royal Canal at Cabra.   Quaternions are now used to control spacecraft, and in computer animations.

The new ‘ingenious Dublin’ tours are doubly unusual and innovative: they tell stories of invention and innovation, and they are digital tours – ‘audio guides’ (MP3) that visitors can download. The tours are written and narrated by an award-winning writer and broadcaster, and mean people can enjoy a perfect tour whenever they want – even listen to the stories at home or on the bus.

The new tours are:

The new tours, being launched for Innovation Dublin and Maths Week, were funded as part of the year-long celebration of Dublin City of Science 2012.

Mary Mulvihill, the science writer who developed the tours, said that “Ireland is great at celebrating our writers and artists, but we also produced lots of great inventors, scientists and engineers, and I’d love more people to know these stories, and be proud of them.”

Her new tours are already something of a cult hit. “We developed these as walking tours over the summer, and now we’re being asked for them by all kinds of groups, even transition year classes, and an alternative hen party!”

The tours will appeal to a wide audience. “They are kind of geeky, yet our biggest audience for our stories is ordinary Dubliners of all ages – they just love learning something new about their home town. And at the end, everyone always says: That was really interesting, I never knew that about Dublin!”

Explaining why the tours have been launched as audio guides, Mulvihill said that this approach is increasingly popular for walking tours internationally. “You get your very own tour, with an expert guide, to take at your own pace, so it’s really convenient, and all for less than the price of a coffee.”   The innovative yet simple solution means her company can provide guided tours all year, 24/7.

The new tours cost just €1.99 and are available to download here. And, because milk chocolate was invented by an Irish doctor, the tours come with a Butler’s Chocolates 10% discount!