You are here: Home › Buzz › How statistics helped to make Guinness good!
By mary on September 25, 2012 in Latest News

An important statistical technique was invented at Guinness’s Dublin brewery, as part of quality control in 1908.  By helping to improve the product, it helped to make Guinness an international brand.  An extract from our new book, Ingenious Dublin, for Arthur’s Day 2012. 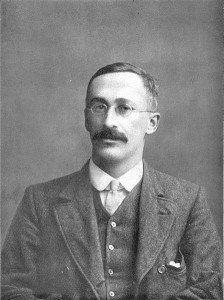 If you wanted to know the average height of the Irish population you could get a reasonably good estimate by measuring a random sample of 1,000 people.  But how good would your estimate be if you could measure only 10 people?

In 1900, brewers at Guinness’s faced just this kind of problem: they were testing new barley varieties that had been grown in trials by the Department of Agriculture, but many of the trials were small and could not easily be repeated – for instance, it would take another year to grow more grain, and the weather then would be different.

Trying to evaluate some of the varieties was like trying to measure the Irish population by studying 10 people.  Fortunately, Guinness’s had just recruited a new brewer, a mathematically minded Englishman William Sealy Gosset (1873–1937), who devised a statistical way of evaluating the results produced from small samples.

Guinness staff could not publish under their own name then, because of a previous case when a staff member published trade secrets.  So Gosset published his technique in an international journal under the pseudonym ‘Student’.  His paper was called: ‘The probable error of a mean’. His technique, called Student’s t-test, is still widely used by statisticians.

By helping to improve the quality of the barley and the brew, Gosset’s test helped to establish Guinness as a reliable, quality brand.  And the rest is history.

Discover lots more stories like this, in in our new e-book:  ‘Ingenious Dublin: Mary Mulvihill’s guide to the city’s marvels, inventions and discoveries’. Downloaded the first chapter for free, and discover all about the River Liffey, the geology of Dublin Bay, and the engineering and development of Dublin docks.