1. Napoleon Bonaparte’s toothbrush is in the Royal College of Physicians, Kildare Street! (Well, one of his brushes!)

2. ‘Humane hanging’ was invented here in 1866 by Samuel Haughton, a TCD geology professor. 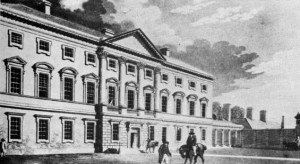 Leinster House, where acetylene was discovered in 1836.

3. Acetylene was discovered in Leinster House in 1836 by a chemistry professor, Edmund Davy, who nearly blew the place up with his experiment.   Davy was  a professor with the Royal Dublin Society, which had its headquarters there until 1922.

4. The first successful radiotherapy for cancer was pioneered here in 1914, again from Leinster House.  (It used radon gas in place of radium, and was invented by a TCD geo-physicist, Professor John Joly.)

5. The founder of earthquake science was a Dublin engineer, Robert Mallet.

Discover more of Dublin’s hidden and secret stories: read, Ingenious Dublin, our guide to the city’s marvels, discoveries and inventions.  Get the first chapter free, from Amazon.

6. The hypodermic syringe was invented at Dublin’s Meath Hospital, in 1843 by Francis Rynd.

7. Sudocrem was invented by a Dublin pharmacist Thomas Smith in the 1930s.

8. The tallest windmill tower in Europe is in Thomas Street (though now without its wings!)

9. An elephant was dissected in Temple Bar in 1681, by a doctor, Allen Mullen

10. Some sophisticated Dublin sums helped to land a man on the Moon!  (To hit their lunar target, Apollo astronauts used quaternion algebra, invented in Dublin in 1843 by Sir William Rowan Hamilton.)

For more ingenious stories, join us for one of our fun and informative ingenious Dublin walking tours.

View all posts by mary →
A song, a walk and a good equation: podcast tour 1
A walk in the tropics of Glasnevin: Podcast Tour 2

One Response to 10 things you might not know about Dublin!