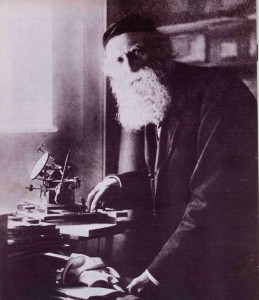 George Stoney & the heliostat he invented

You could say that the electron, one of nature’s fundamental particles, was invented by the Irish physicist George Johnstone Stoney (1826-1911). Stoney, born at Oakley Park, Clareen, was the first science professor at the then new university of Queen’s College Galway (now NUI Galway).

A great champion of the metric system, Stoney believed science would benefit from a wise choice of standard units and this prompted him to invent the idea of a standard unit of electricity. Stoney initially called his unit an ‘electrine’ (he later changed it to electron) and he presented his idea to the British Association for the Advancement of Science (BA) at its 1874 annual meeting which was held in Belfast. Stoney also calculated that the electron’s charge was 10-20 Coulombs, based on his analysis of chemical reactions (we now know the charge is 16 times greater, but Stoney’s estimate was reasonable for the time).

Many international scientists liked his idea for an electron, including the German physicist Hermann Helmholtz. In Ireland, Stoney’s nephew and noted scientist George Francis Fitzgerald also championed the concept. When in 1897 an English physicist, JJ Thomson, discovered that cathode rays were beams of negatively-charged particles, Fitzgerald immediately realised these particles were Stoney’s electrons. Today, Thomson is credited with discovering the electron (though for years he persisted in calling them corpuscles) and Stoney is credited with inventing the concept and name.

George Johnstone Stoney had learned his science at Trinity College Dublin. In 1848 he went to work for Lord Rosse as an astronomical assistant on the Birr telescope, and in 1852, thanks to Lord Rosse’s influence, he became at 26 the first professor of science at Queen’s College Galway (John Tyndall also applied for the job, but though better qualified, had no one in Ireland to champion his cause).

As well as conceiving of the electron, Stoney worked on optics, gases and extraterrestrial bodies, and calculated the amount of energy expended in riding a bicycle. He developed a musical shorthand, suggested new designs for pianos and organs, and persuaded the Royal Dublin Society to hold public concerts. Later, as a university administrator with the Queen’s Colleges, he campaigned for higher education to be opened to women – thanks to him, women earned medical qualifications in Ireland long before their sisters in Britain.

In 1893 Stoney moved to London where he felt his daughters would have better career prospects (one took after her father and became a noted physicist, the other a distinguished medical doctor). Stoney Road in Dundrum, Dublin, is named after him.

Stoney’s younger brother was the innovative engineer Bindon Blood Stoney, who also worked for Lord Rosse, before achieving engineering fame by helping to build the Boyne viaduct and much of Dublin’s docklands.

4 Responses to The man who ‘invented’ the electron