You are here: Home › Buzz › Calculating the date of the Creation
By mary on October 23, 2012 in Latest News 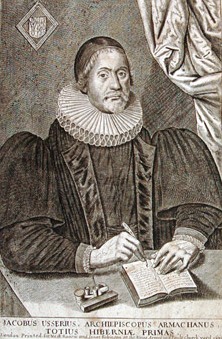 The world began on this day 4004 BC, according to Archbishop James Ussher from Dublin, the man who famously calculated the date of the Creation by counting the ‘begats’ in the Old Testament.  But his work meant this ingenious Irish ‘scientist’ was also one of the first people to try and estimate the age of the Earth.

In the early 1600s, Ussher spent years painstakingly calculating the date,  using copious sources of information, not just theOld Testament: he also studied ancient Egyptian and Hebrew texts, analysed how ancient calendars were devised, and consulted with astronomers.  And then he concluded that the world began at the start of the autumn equinox (October 23rd in the old calendar)  in the year 4004 BC.

Today, people often laugh at Ussher’s calculation.  Yet, it was the height of scientific scholarship for its time, and Ussher was using all the available evidence.

Ussher was not alone in his calculation — lots of other famous scholars were doing the same thing.  Newton and Kepler both reckoned the creation took place about six years earlier, around 3998 BC.    John Lightfoot, an eminent Hebrew scholar at Cambridge, thought it was 80 years before that.   And there were heated arguments about whose date was correct!

The calculation they were doing was called the Chronology, and the scientists didn’t just calculate the date for the Creation, they also calculated dates for other biblical events:  Ussher reckoned that Noah’s Flood happened in the year 2348 BC, for instance, and the Exodus from Egypt in 1491 BC.

The reason Ussher’s chronology is so well known, rather than any of the others, is because his was used in printed English bibles,  given the same respect as the Scriptures, and widely accepted until the late 1800s.

One of TCD’s first students

Ussher (1581-1656), was one of the very first students at Trinity College.  He was born in Dublin and came to study at TCD in 1594, a year after the college opened its doors, when he was just 13.  He later became the Archbishop of Armagh

Archbishop James Ussher managed to be a friend to both Charles I, and to Oliver Cromwell, which was quite an achievement. He is buried in London’s Westminster Abbey. He bequeathed his book collection to his old college, and it formed the start of Trinity’s great library.

Ussher’s calculation is just one of the stories in our Elephants and Earthquakes tour of ingenious Dublin and great Irish scientists, available to download now.

For lots more ingenious stories like this READ: Ingenious Dublin, Mary Mulvihill’s latest book, available now as an ebook from Amazon.  Or try our audio guided tours of ingenious Dublin.