You are here: Home › Buzz › The ingenious Irish: Denis Burkitt
By mary on February 28, 2011 in Latest News 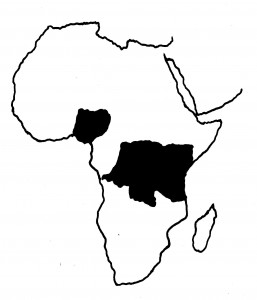 Geography & cancer: Burkitt's map of the incidence of the lymphoma

One of the great Irish medical scientists of the 20th century, Denis Burkitt (1911-93) was the first person to identify a cancer caused by the environment (named Burkitt’s lymphoma). He later proved that diet played a role in bowel cancer.

Denis Burkitt was born 100 years ago today on February 28th 1911, and a centenary symposium in his memory takes place in his former college, Trinity College Dublin, later this year.

Burkitt, a deeply religious man, was born near Enniskillen, and studied medicine at Trinity College Dublin. His father, James Burkitt was a surveyor and keen naturalist who pioneered the use of rings to identify birds, map their territories and plot their distributions. Denis later used a similar technique to survey and map the distribution of cancer.

After World War II Burkitt and his wife, Olive Rogers, a nurse, went to Africa on medical work. There, Burkitt studied a disfiguring swelling of the jaw, common in children living in certain parts of Africa and fatal if untreated. He identified the swelling as a lymph tumour (Burkitt’s lymphoma) and then set about mapping the incidence of the disease across the continent.

In a ground-breaking study published in 1959 he showed that it occurs in a central belt and significantly, its distribution coincided with various insect-borne diseases1. (British Journal of Surgery 1959: 218-202). Despite working with limited resources, Burkitt developed a cheap and effective cure for the disease using low doses of a chemotherapy compound, methotrexate, making Burkitt’s lymphoma only the second cancer to be treated with drugs.

Next, an international team led by Tony Epstein and including Irish geneticist Yvonne Barr, found a virus in samples taken from patients with Burkitt’s lymphoma. In 1966 they showed that the Epstein-Barr virus, as it is now called, can cause cancer in people whose immune system has been weakened by malaria. Burkitt’s lymphoma was thus the first cancer shown to have an environmental cause.

After 20 years in Africa, Burkitt moved to the Medical Research Council at London in 1966, where he switched to studying diet and disease, then considered something of a fringe area. Prompted by South African research linking diet and bowel movements, Burkitt showed in 1971 that a high-fibre diet helps prevent bowel cancer. His book Don’t forget fibre in your diet (1979) was a bestseller and helped raise public awareness of the need for dietary fibre. Burkitt was awarded many international honours, including membership of the prestigious French Académie des Sciences. Active to the end, he gave a lecture just before he died.