You are here: Home › Buzz › Dublin’s Victorian diving bell
By mary on November 8, 2011 in Latest News

There was a lot of interest when I mentioned this lovely Victorian diving bell at the Open Data event in the NDRC.  This odd metal structure is on Sir John Rogerson’s Quay, Dubliners pass it all the time, and many people probably think it is scrap metal. Yet this is a wonderful piece of our ingenious engineering heritage. 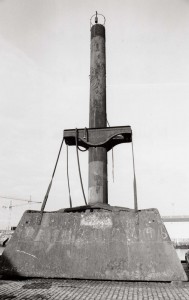 It was designed in 1860 by the port engineer, Bindon Blood Stoney. The bell was crucial to Stoney’s innovative way of building dock walls with pre-cast concrete, and there was great international interest in it at the time (see below).

The lower section is hollow and bottomless, with just enough room for six men to work. Once the 80-tonne bell had been lowered into position in the river, the crew entered through an access tunnel from the surface. Compressed air was fed in from an adjacent barge, but even though the air was cooled, the temperature inside quickly became unbearably hot, and shifts lasted only 30 minutes.

The men inside the bell worked on the river bed exposed at their feet, excavating the site where a massive concrete block would later go; all the excavated soil was stashed in baskets hanging inside the bell, and brought up when the bell was lifted.

Amazingly, the bell was still in use in the 1960s to repair dock walls, by which time it had a telephone link to the surface. It was renovated in 2000, when holes were cut to provide a view of the interior.

An alternative diving technology used to be on show at the nearby Waterways Centre: a canvas diving suit, tightly woven to keep water out, and worn with a metal helmet; air was supplied via a tube connected to a pump on the surface. The suit was bought in 1905, and worn by Denis Madigan and later by his son when repairing canal locks and inspecting seaplanes at Foynes. Despite being patched, it was still used in the 1970s.

The North Bull Wall was part of a major programme to develop Dublin’s docklands in the mid-1800s. It was fuelled by increasing overseas trade – all of which went by sea in those days – and the arrival of big steamships needing larger berths.

The engineer who did most to develop the docks was Bindon Blood Stoney (1828-1909) , who devised an ingenious new way to build dock walls, and pioneered the use of pre-cast concrete as a building material.

Stoney was born at Clareen in County Offaly, to a family that had come to Ireland from ‘stoney’ Yorkshire during the 17th-century plantations (Blood was his mother’s family name). He and his brother George Johnstone Stoney (who ‘invented’ the electron), worked as astronomical assistants on the great telescope at nearby Birr Castle.

Bindon studied engineering at TCD and made his name in the 1850s working on the Boyne railway viaduct at Drogheda* – the elegant metal viaduct was an engineering triumph and is still in use. He moved to Dublin as a port engineer, and under his care the docks were rebuilt and extended, especially on the northern side. Several kilometres of new quays were built, also new graving (dry) docks and the Alexandra Basin, named after the princess of Wales who opened it in 1885.

The system Stoney invented for building dock walls was to use massive pre-cast concrete blocks instead of stone and rubble. First, the ground to be levelled, then the blocks made on-site and lowered into place.  Traditionally, men would do the work inside a wooden dam from which the water had been pumped out.  But Stoney designed the diving bell so they could work underwater.

The concrete blocks used were veritable monoliths, weighing an unprecedented 350-tonnes; each took four weeks to make and a further 10 to ‘cure’ before they could be moved. The design called for precision engineering to ensure a tight fit between the blocks. Once part of the new quay wall was built, the blocks for the next section could be made there, and so the wall inched forward.  The technique was first used on the North Quay extension beginning in 1870; only when that was complete in 1884, did attention shift to the southern side, where the docks were by then in bad repair.

The resulting berths were independent of the tides, and deeper than any other port at the time, and there was considerable international interest: when the British Association for the Advancement of Science (BAAS) met in Dublin in 1878, an expedition visited the docks to inspect the technique.

The docks are an enduring monument to Bindon Blood Stoney – known as “the father of Irish concrete” – who won international fame for his innovative work.  Stoney Road near the East Wall is named after him.